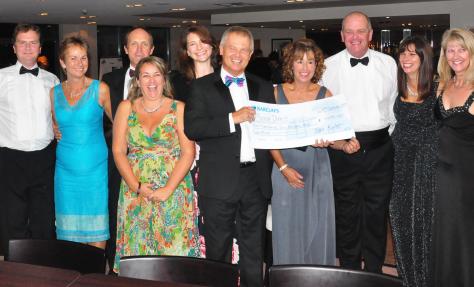 Some of our supporters from a recent ServeDirect organised trip out to Uganda bravely picked up the gauntlet to organise a Summer Ball in support of ServeDirect and our work.

After many months of preparation and organisation, that ServeDirect Summer Ball was held on the evening of September 21st at the Holiday Inn Winchester. It was very well attended by friends and supporters, all of whom enjoyed being entertained by a roving table magician and were given opportunity to bid on some great auction prizes during the evening including a Ugandan crafted hand-carved chair, a very special rugby event prize, and many beautiful craft items brought back from craftsmen in Uganda.

Michele Ball, Jerry Dugdale and his wife Elspeth, all founding ServeDirect representatives, shared some of the charity's history and project stories including a short video that graphically showed the progress from start to present day at the WTA school, and included excerpts from 'thank you' letters written by children at the school.

The evening's fundraising made at least £4600 for the charity and a cheque was presented by the organising team (from far right to left, Rachael O'Keefe, Nicki Aiken, Steve Clasby and Petra Allen) to Trustees and representatives of ServeDirect.